Fusalp, a brand looking to the future 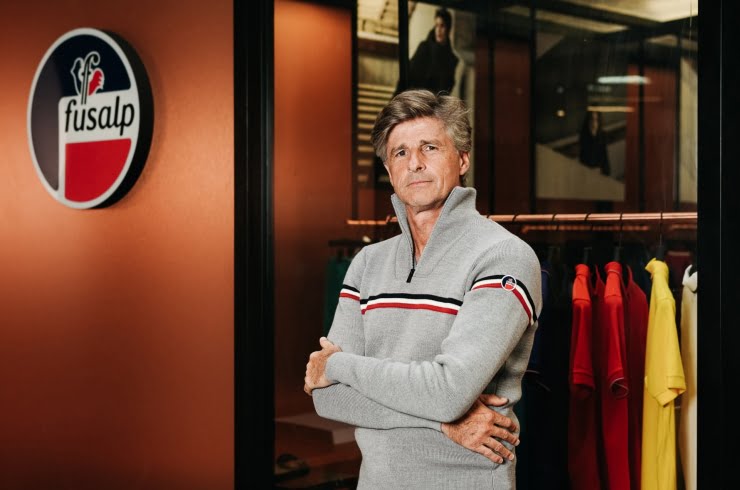 Faithful to its original DNA, Fusalp has established itself in the urban landscape for a few years. A know-how between the mountain and the city which has been part of the heritage of French sport for 70 years and of which its Managing Director, Alexandre Fauvet, rekindles the spark when he takes over the Alpine brand in 2014. Story of a beautiful human adventure.

In December 2013, Sophie Lacoste, Philippe Lacoste and Alexandre Fauvet bought Fusalp. The latter, after nearly 15 years at Lacoste, takes over a brand whose name everyone knows, but which has disappeared from the radar. And the first thing it does is take the traditional blue, white, red logo of the brand, abandoned by its predecessor. For the Managing Director of Fusalp, it is a symbol. ” Through this gesture, the idea was to find the values ​​of the brand. We had to rediscover the myth created thanks to the champions and these victories at the Olympic Games “. A legendary brand that Alexandre Fauvet wants to bring up to date by incorporating innovation. The evolutions of Fusalp suits are due to the technical innovations which accelerate at the time of the Second world war. It was therefore necessary to reimagine ski clothing, in particular thanks to the champions who made the aesthetics of Fusalp.

After a great adventure at Lacoste, Alexandre Fauvet notes that there are very few actors capable of providing a wardrobe that is both technical and chic. He was offered the purchase of Fusalp, illustrious ski equipment manufacturer for a few years adrift. It is obvious then. He easily convinces Sophie Lacoste and Philippe Lacoste to take them on the adventure. ” We used this brand to convey a vision of a wardrobe, a collection and products. », Explains Alexandre Fauvet. In two years, the takeover team tripled the average prices of its products and opened its first Parisian store in the Marais in 2015. A bet that worked, since the address was 60% more than its objectives in its first year. Right away, Fusalp 2.0 meets its audience. ” We had to keep the brand’s reference codes but in a contemporary vision. Because our DNA is innovation. We try to make the link between this glorious past and the future as we want to write it. This is what makes it different from other brands. We insert a retrofuturistic paw “. When the associates launch the first collection, connoisseurs recognize Fusalp’s ancient know-how in today’s clothing. In four years, the brand is back afloat between skiing and ready-to-wear and in 2019, turnover amounted to 25 million euros, against 6 million at the takeover. Today, Fusalp has 48 stores around the world.

In 2020, Fusalp is not escaping the crisis which is hitting sales head-on. The sales of the equipment manufacturer from Annecy fell by 12%. With a positioning that goes upmarket and a tourist focus, the brand is punished but resists, successfully transforming into ready-to-wear technical and warm clothing. Alexandre Fauvet and Mathilde Lacoste, Artistic Director of Fusalp, then went to Italy to recruit the best model makers. ” We needed a fair construction, with clothing close to the body but allowing ease. A top-of-the-range Fusalp ski jacket, it is no less than 90 elements associated together », Says the Managing Director, who in 2019 decided to develop the brand internationally, by opening pop-up stores in China, Scandinavia and London. Today, Fusalp has four outlets in South Korea, three in China and six stores in Switzerland. Alexandre Fauvet is now preparing the ground for an opening in the United States for the winter of 2022. If the brand grows, much remains to be done for its Managing Director on the e-commerce part to become a well-known brand.

In 2022, for Fusalp’s 70th anniversary, Alexandre Fauvet is animating an atypical project. Writing a book on the history of the brand. For the leader of Fusalp, it is ” an essential freeze frame. This book is important for future generations, for those who join the company today and for those who have lost sight of what Fusalp was. “. The common thread of this story is the human adventure. ” We had wonderful people, champions and even the seamstress testify. We called on a fabulous screenwriter, Mohammed El Khatib who took charge of this project to sublimate this epic “. In this new year, the Fusalp teams are animated by this permanent conversation between the past and the future, between the mountain and the city. A dialogue between technical sport and ready-to-wear. And in this evolution, there is the conversation between the digital world and the physical world. A gift of ubiquity that sticks to the skin of the French brand, and that its designers intend to honor by designing clothes that have this dual function. ” When Mathilde Lacoste designs a ski jacket, I always ask the same question: will I be able to walk in the streets of Paris without being ridiculous? This permanent dialogue is our wealth and this allows us to come out with unique and different products. “. With this in mind, Fusalp has just set up an innovation program, Fusalp Futur.

Innovation at the service of beauty and technique

The alpine tailor is one of the few brands to have a laboratory that tests materials. With Fusalp Futur, heated jackets are tested, using mechanical technologies, like a radiator in the garment. The latest one communicates via Bluetooth via the telephone with sensors that measure body temperature, adapting the level of heating of the jacket. A city parka, the bestseller Fusalp, which Alexandre Fauvet tests at an altitude of 3000 meters while skiing, and the result is conclusive. The next step is to work on sustainability. And for this, a lifelong product repairability program has been set up as well as a 5-year international warranty covering a wide selection of ski and urban products. ” We want to create clothes that will still be worn in 30 years. We are anti-fast-fashion. We only want products that last. We are also in the process of releasing animal matter “.