Uncharted: The adventure awaits us on the new poster of the (…) 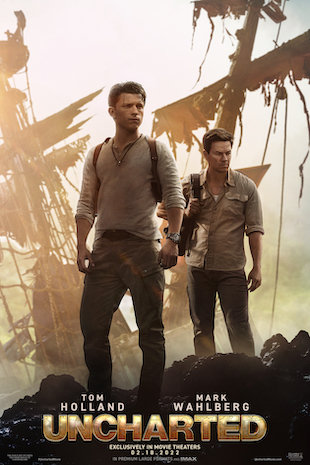 Sony Pictures has released a brand new poster (seen below) for their film Unexplored, adapted from the eponymous video games with Tom Holland, Mark Wahlberg and Antonio Banderas.

The movie’s release is fast approaching and fans of the video game franchise are getting a little more excited every day. The poster showing for the past few days gives us a fresh look at the entire cast of the upcoming blockbuster, which follows a duo of treasure hunters out in search of lost ancient artifacts.

Unlike the previous poster (opposite), the new one is much more colorful and emphasizes the adventure aspect of the film, with thrill seekers on their way to explore an island, a beautiful sunset the background and the main actors together on a background of sky and compass.

The trailers ofUnexplored revealed that Sony and PlayStation Productions spared no expense in making the film look like the adventure of a lifetime, with jaw-dropping stunts performed by Nathan Drake (Holland), like jumping out of a plane, and scenery including ancient ships, caves and everything you would expect from a treasure hunter adventure. According to The New York Times, the film would have cost $120 million to make.

Unexplored is directed by Ruben Fleischer. The screenplay for the video game adaptation was entrusted to Art Marcum and Matt Holloway. The film is expected in French cinemas on February 16.

Synopsis: Thief Nathan Drake (Tom Holland) is recruited by treasure hunter Victor “Sully” Sullivan (Mark Wahlberg) to recover a fortune lost by Ferdinand Magellan 500 years ago. What starts out as a simple heist for the duo turns into a frantic race across the globe to reach the prize before the ruthless Moncada (Antonio Banderas), who believes he and his family are the rightful heirs. If Nate and Sully can crack the clues and solve one of the world’s oldest mysteries, they have the chance to find a $5 billion treasure and possibly even Nate’s long-lost brother…but only if they can learn to work together.