Pokémon Legends: Arceus is the latest title in the saga. After a release at the end of 2021 of the half-hearted remakes of Pearl and Diamond, it is a brand new adventure that is offered to us today. And if the bottom remains unchanged, namely to complete the Pokédex by capturing all the Pokémon, the form, it seems to want to evolve. Let’s see if this Pokémon Legends: Arceus keeps all its promises.

Game Freak is not at its first attempt with Pokémon and the formula is refined with each new version. And if until now the Pokémon games were more or less interventionist with corridors to follow and a false impression of freedom, the studio seems to want to free itself from its own codes. Thus the player is propelled into the Hisui region via a space-time rift. And you will have to relearn everything. 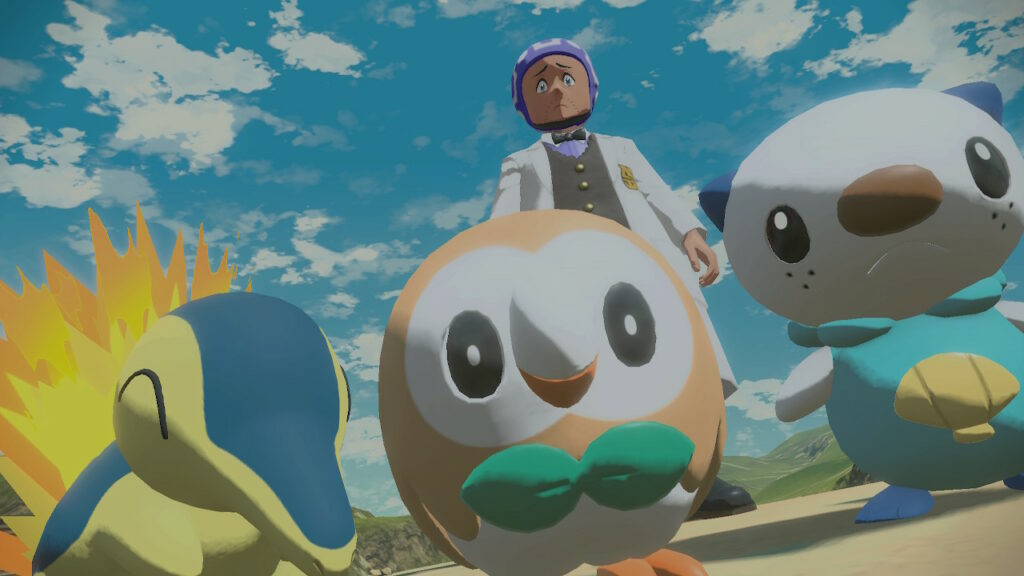 Pokémon Legends: Arceus begins like this. You create your player, but instead of your mom sending you out into the wilderness at age 12 to fight Pokémon, you fall from the sky. Professor Indigo falls on you and detects in you the potential to become an excellent researcher. Why not a trainer? Quite simply because at the time when you are, humans have not yet tamed Pokémon and these remain wild, even frightening creatures.

But your character seems quite familiar with them. This is why you will become a recruit of choice for the Galaxie Group, which will quickly enlist you at its side. It will thus be necessary to go on an adventure in the lands of Hisui in order to discover all the Pokémon but also to understand the origin of this spatio-temporal fault which hovers over the region like a threat.

If you’re a regular at Pokémon games, the first thing that will strike you is capturing these little critters. Indeed, these roam freely in the wild lands and you can throw a Pokéball at them at any time to try to capture them. It is possible to crouch down to approach them quietly. Or to hide in the tall grass to go unnoticed. A surprised Pokémon will be easier to capture. 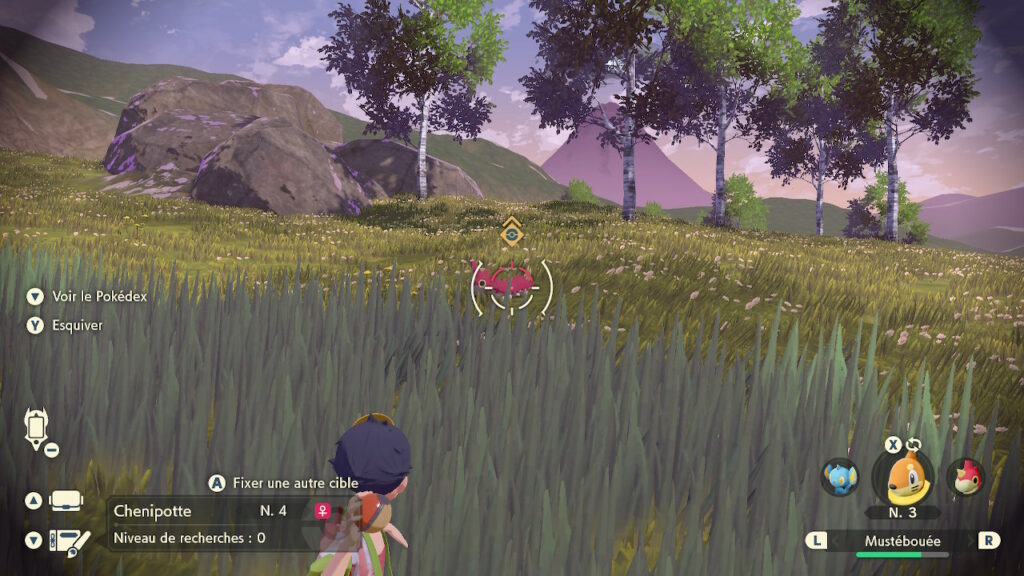 However, Pokémon may decide to attack you on sight. In these cases, you have two options: flight or fight. And there too new: no transition, you can directly launch one of your six Pokémon on the ground. The clash begins and it has become very dynamic because your character can move around the Pokémon to observe. Be careful not to put yourself between the two because it is possible to take hits!

Besides, the Pokémon that rush at you without you having started a fight can do damage to your character. This is materialized by a black outline on the screen. And if you take too much, you pass out and wake up at the nearest camp, a few less items. If you play on the Internet, other players can collect your items and send them back to you in exchange for BA (good deed) points.

To dada on my Pokémon

On the new side always, it is now possible to move on the back of Pokémon (there are several with whom it is possible) in order to go faster. This allows you to avoid unnecessary clashes and especially to dodge Pokémon Barons. They too are newcomers to the franchise. These are larger and tougher Pokémon than their peers. And it will also be more complicated to beat or capture them. But if you succeed, you will earn a lot of experience and have a fearsome creature at your side. 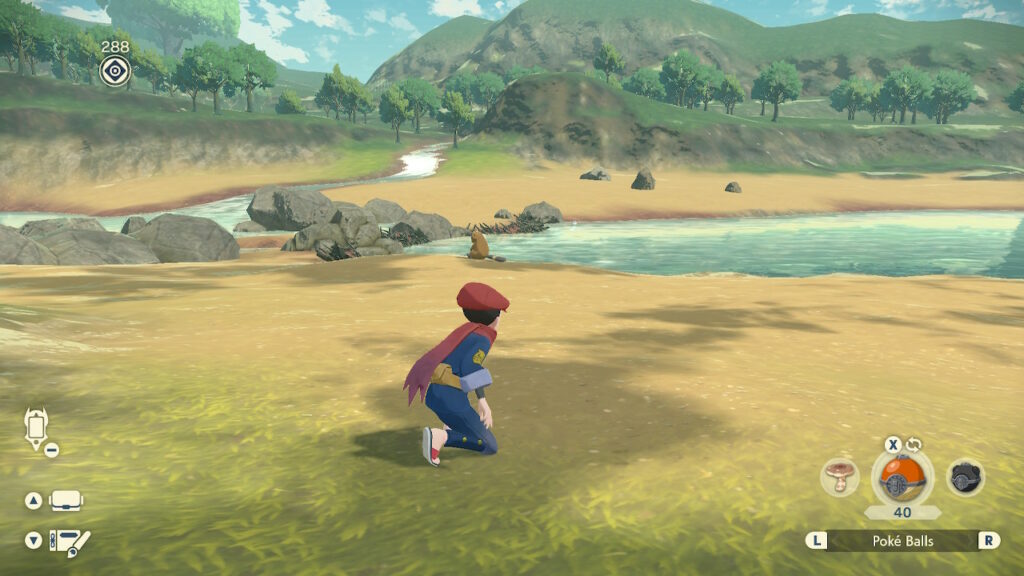 This is also why the game also introduces the notion of dodging. Indeed if a Pokémon attacks you in the wild, it is possible to roll by pressing Y. This prevents you from taking hits and can save you the day. Finally, the other novelty that makes its appearance in Pokémon Legends: Arceus is crafting. You will be able to make Balls, potions and other remedies by collecting all the ingredients that dot the map.

Not easy to complete the Pokédex

If you want a complete Pokédex, you will have to be persistent. Indeed, it is no longer enough to capture a Pokémon to have its complete sheet in front of you. Now there are several criteria to fulfill: capture him several times, beat him several times, see him use such an ability, approach him without being seen, etc. This requires a real work of explorer and researcher which, it must be admitted, can seem painful at the beginning. But which turns out to be pleasant thanks to the pleasure we take in playing. 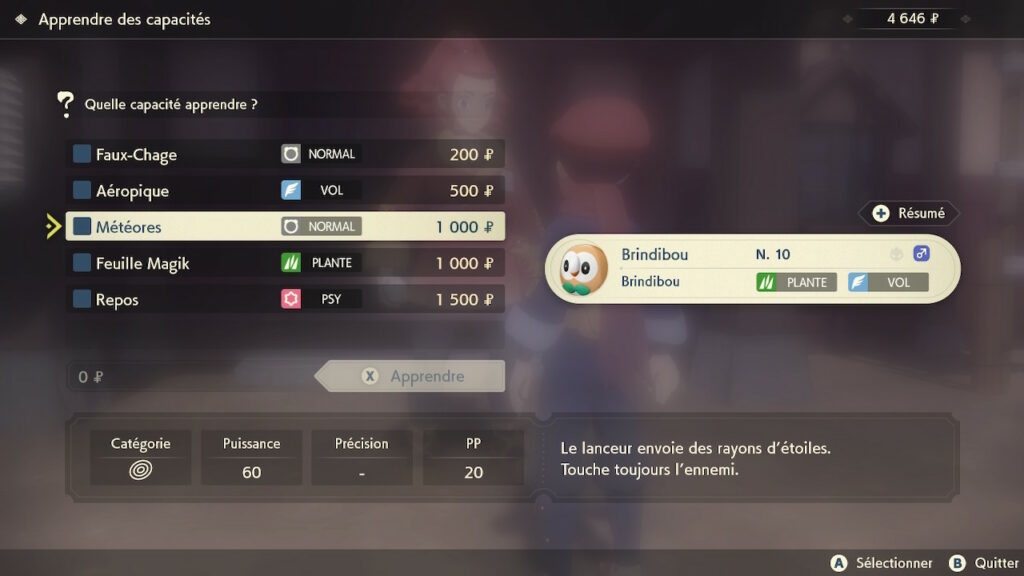 Now let’s talk about the so-called “open” world. Indeed, Pokémon Legends: Arceus offers great expanses to visit. But that doesn’t mean it’s an open world. Breath of the Wild. These huge arenas are actually closed and you have to go through a trip and a loading time to change them. Despite everything, there are several zones in the same arena, which leaves plenty of time to explore it day and night. And if the impression of freedom is there, we are still far from a game that lets us do everything we want in the desired order.

With all the slightly RPG component that appears in the game, we also note the presence of many side quests. If these do not shine by their originality, we can say that they are numerous. These are NPCs who will ask you for ingredients, Pokémon, to find a missing person, to show them a complete page of the Pokédex… Nothing new under the sun, but it’s still a pleasure to help, especially since it can help us. help earn stars.

Stars are also a new system in Pokémon Legends: Arceus. If in the old games you had to beat arena champions to master a certain type of Pokémon. And control Pokémon of a certain level. Here it has changed, it works with ranks. In the Galaxy Group, you will often report to Professor Indigo and the group leader. Depending on your actions you will earn points and raise a kind of XP bar. 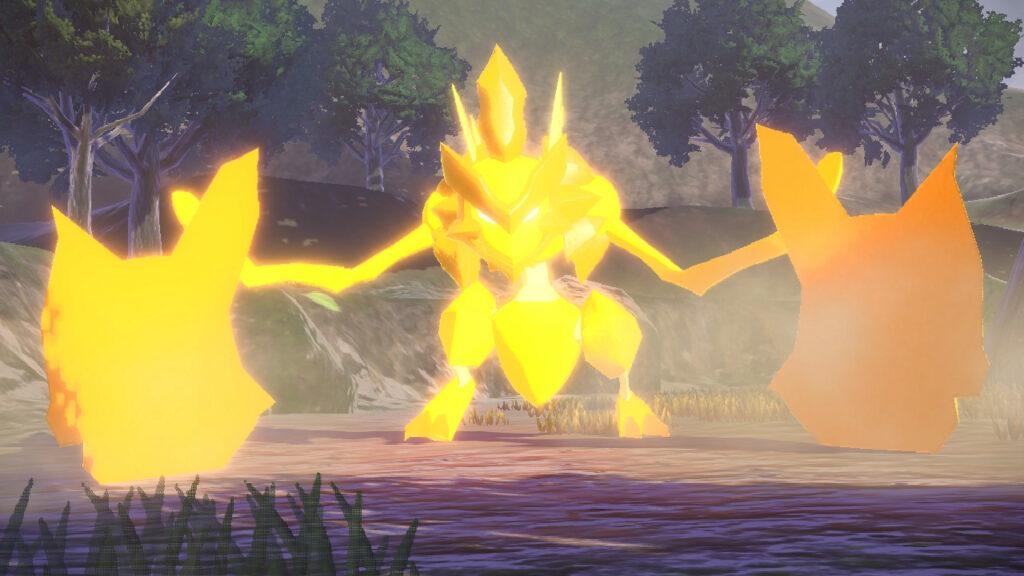 When it is full, you gain a rank. So you go see the chef at Rusti-Cité to get your star and thus access new items, crafting patterns and Pokémon mastery. This is how you will be able to progress and capture more and more powerful Pokémon. And thus lift the mystery about Hisui, Arceus and the space-time fault.

A game full of qualities and defects

Pokémon Legends: Arceus is really fun to browse. No more frozen screens to announce a fight every three steps that tense the day. There we walk freely, in pretty environments (we will come back to this later) in search of materials and Pokémon. There is a really relaxing side to these wanderings that one makes before pursuing a mission. There’s something strangely zen about these moments, even when a fight begins or a Pokémon Baron rushes at you.

Now, let’s come to the game’s flaws. Well, the main one and it’s nothing new: it’s not very pretty. Certainly the developers had to make some concessions to display such a gigantic terrain without loading time. But offering such a horizon and managing to pop textures and Pokémon a few meters in front of you, it’s difficult to pass.

Just like the fact of still having, in 2022, a mute main character. We see him talking, he moves his lips, but what he says is neither pronounced nor subtitled. The impression of embodying an empty shell is therefore stronger than ever. Finally, if the formula is refreshing for the first few hours, it quickly leaves a repetitive aftertaste after a while. Not to mention the management of the inventory which pushes to go back and forth to juggle with the materials. Or else you have to spend your hard-earned money to upgrade the size of your bag.

Our review of Pokémon Legends: Arceus

Finally, what impressions do we have after playing Pokémon Legends: Arceus? Overall good impressions. Admittedly, the game does not live up to its ambitions. But he is clearly heading down a path that suits him perfectly. This feeling of freedom and tranquility during the exploration phases is the perfect match for a rather well-crafted scenario that introduces us to the Hisui region and its mysteries. Pokémon regulars will find many references that are a pleasure to see. And we quickly override the graphic weaknesses to focus on balanced gameplay and intact gaming pleasure 25 years after the beginning of the license.