Following the adventures of the Maurienne Escalade club

By the Maurienne Escalade club

Following on from the outings and courses offered last November, the Maurienne Escalade club, winner of the 2021 multi-activity call for projects, tells us about its various adventures at the start of the year.

Sunny day, head for the heights of Aussois for a ski touring outing.

On the program, an hour of discussion around a coffee and then departure “skis on foot” from the house of our guide, towards the dams and the 850m of altitude difference to be made. We take this opportunity to review the six observables (Avalanche Risk Estimation Bulletin, elevation of the TC°, recent avalanche, overload, 30° slopes and fragile layers), the modes of vigilance (relaxed, suspicious and alert), the famous converts. We also did an arva search!

Even if the snow was not exceptional on the descent, we enjoyed ourselves while learning thanks to the Aussois sun and the good humor of the participants!

Saturday morning, the adventure team and several adults from the club met at the Nant waterfall with François.

This day was an opportunity to review a few safety rules and to deepen the techniques of ice climbing for the members of the adventure team: lock picking, efficiency, lead climbing.

For some, ice climbing will have been a discovery: “Cwas my first icefall! says Cécile. ” Barely started, I had already filled my eyes thanks to the approach walk: the gorge of the arc is impressive, the river is as usual tumultuous and frozen, Fort Victor-Emmanuel overlooks us, the forest is peacefully snow-covered and finally the impressive Nant waterfall, frozen. All the conditions are met, to have a good time.
Then I discover the site, the gear, a few new words (like François’ favorite word “dry”, don’t hesitate to tell him about it), the professionals install the routes. Fortunately, François, a good teacher, teaches us the right gestures, the right reflexes and we’re off to test ourselves at this incredible climb! Whahouu… these are great sensations! Not even cold and not even scared!
It was a great day to continue learning, to progress, to get out of your comfort zone and above all… to have fun! ». 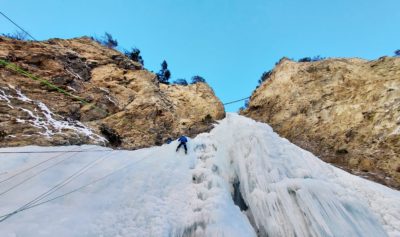 During a previous outing, we had the opportunity to see the six observables, today, it was a question of deepening the most pernicious of all: “the fragile Layers”.

So we meet at François’s, for an hour of theoretical lessons on the transformation of snow. When the gradients have no more secrets for us, it’s time to hunt for fragile layers!
It is under a magnificent sun that we take the ski lifts of Aussois with the objective of completing the tour of Grand Chatelard. We go through all the directions which turns out to be very interesting from a snow perspective.
After finding a few well-buried “goblets” in the North East and carrying out a conclusive “shovel test”, we went up to the summit of Grand Chatelard for a picnic. We then went for a walk at the bottom of the magnificent valley of the Fournache!
A descent in good snow and a stop at the Bar d’Oé will put an end to this magnificent day in the mountains. 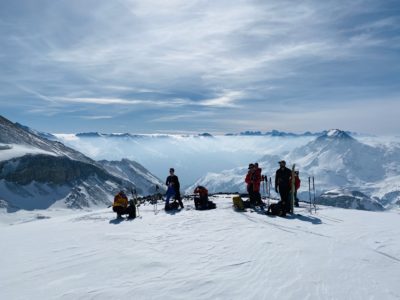 There were only four of us for this last ice outing, so we took the opportunity to do a three-pitch stunt with an autonomous rope party. The Châtel waterfall, above Val Cenis. Paul will take Martin to the right side of the waterfall, a very nice grade five. Paul did a great job with a good placement of the pins, congratulations to him!
François will pass on the left with Nelly and Florent. It’s less steep, but they were able to progress in a veritable cathedral of ice!
We leave early, safety requires to avoid having roped parties above us. Fortunately, we will be relatively quiet in the waterfall and will be able to enjoy it. The other advantage is that we are on time for a good restaurant once the waterfall is over!

This outing marks the end of winter activities for the adventure team of the Maurienne Escalade club!
Next big meeting in the spring in Orpierre on the weekend of May 14, 15!

More info about the club
The Adventure Team program