Dampierre and Morrisson (An Adventure of) The Sargassum Cemetery 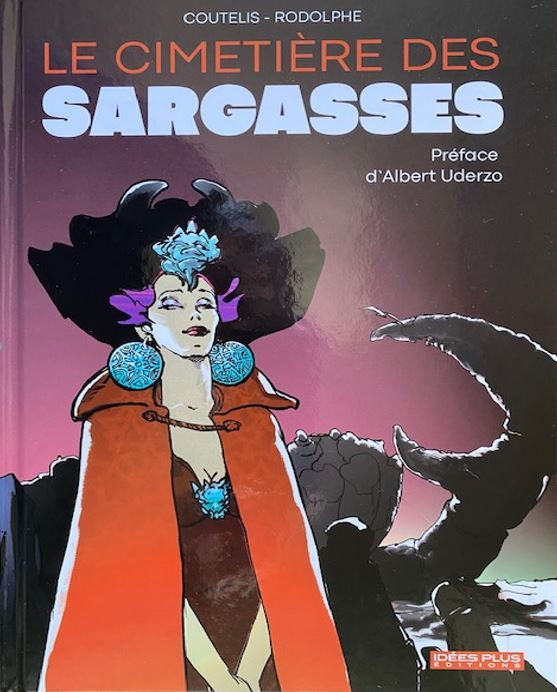 Paul Dampierre is a fulfilled man. In this beautiful month of July 1956, he embarked on L’Ulysse, his uncle’s yacht, in the company of Caroline, known as Câline, his betrothed, ravishing and madly in love. Summer sweetness, jazz and voluptuousness are on the menu for these cruise nights. First it is the radars that malfunction, then the mist that interferes in the game. Finally, it is the collision with a freighter and Câline falls into the sea. In a short time, waterways are identified, the evacuation is organized, with its share of panic. Paul and an Irish sailor, Patrick Morrisson, cannot evacuate. They stay on board, while the boat drifts away. The sea bass scatters the main marine legends: the city of wrecks in the Sargasso Sea, the derelicts, the Flying Dutchman, the Kraken. Over the hours, the surface of the sea is covered with thick algae. The two men cross and approach the Erebus, another lost building. They discover there a man alone and terrified, but also the corpses of the crew, the severed members. Their wandering resumes after they have returned to their ship, the currents dragging them inexorably towards the lost city of Sargasso.

The Sargasso Cemetery is the complete reissue of a diptych whose editorial peregrinations are worth the setbacks of its heroes. A first volume The Cemetery of Fools, was published in 1984 by Dargaud, then the series was interrupted. It will be necessary to wait until 2015 for the publication of the second volume, Sargassum, published by Albiana. Today, Idées Plus Éditions has the good idea of ​​bringing the two opuses together and making them accessible. The screenplay is by the prolific Rodolphe (Kenya, The Locks of Heaven), Coutelis’ drawing (AD Grand-Rivière, Private). As Albert Uderzo writes in his preface, there is “a good script with a beginning, a development and an end”, “disturbing characters in their burlesque aspect” and “a detailed realistic drawing”. This is indeed a classic adventure, carried by a subtle suspense, endearing characters and a well-balanced mix of genres. This maritime nightmare is told in the spirit of Jules Verne or HP Lovecraft. The imaginary refers to series such as Bernard Prince, Jeremiah Where Waters of Mortelune.

Coutelis had a great time drawing these rusty carcasses, these intertwining cables and ropes, these makeshift pontoons and this humid atmosphere. The characters are remarkable for their beauty (Queen), their deceit (Le Grand Coordonnateur), their determination (Morrisson) or their melancholy (Dampierre). Upbeat, action, humour, a hint of eroticism and a dash of romance are the perfectly balanced ingredients of this full-bodied and refreshing cocktail. It is absurd that this mini-series was not supported in its time. This is an injustice repaired. Attention, there are only one thousand two hundred copies put on the market.